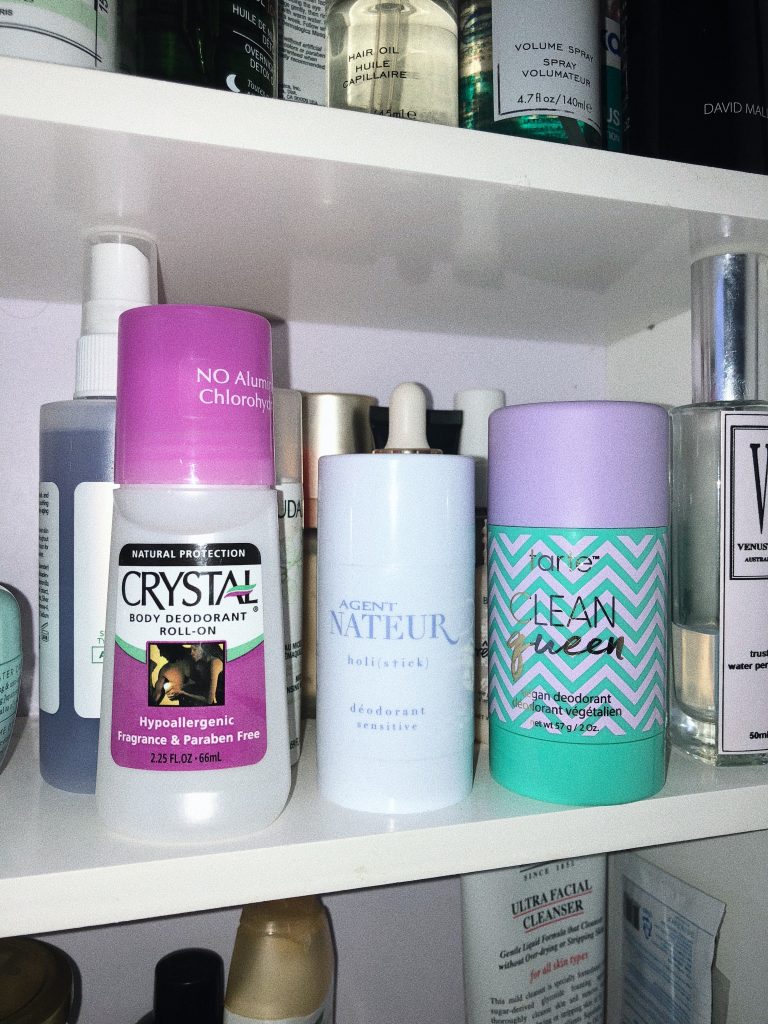 My hunt for a good natural deodorant started around the fresh age of 14, when I began to notice I was developing a…scent…upon perspiring, and having my mother reprimand me immediately when I asked her to buy me an aerosol can of dove, or Rexona, or whatever everyone was using back then. She told me how awful chemical deodorants are for me, and banned them from the house, instead buying me a (TBH) really gross natural deodorant which made me smell 10x worse especially after P.E class. I bought the dove spray anyway, and hid it out of sight, but after a few months of using, I couldn’t get her words that my body wasn’t detoxing properly if I used deodorants which prevented me from sweating, out of my head.

To preface, before I begin this article properly, I’m not an overly smelly person, nor overly sweaty, so for me, my deodorant M.O is a bit more relaxed than maybe someone who sweats profusely or smells profusely. I just want something that is going to keep any bad smells away for as long as possible. Using natural deodorants is a bit of a switch, in case you’re curious about the transition. A lot of people say that they smell worse when switching to natural deodorants as your body is finally getting rid of all the toxins that your chemical deodorant was preventing from escaping (yuck and yikes), however, I have been on the natural deodorant band wagon for some years now, and actually prefer applying them. I’m no longer powdery, I can feel my body ~breathing~, and I really don’t smell that bad unless I’ve completed a particularly strenuous workout in hot weather (rare).

Moving on, here are 3 natural, aluminum free deodorants that I put to the test, and encourage you to make the switch too because it ain’t health unless ya pits are breathing (sorry).

The Scent: Powdery yet clean, reminiscent of dove, kind of a nice break from sandalwood scented natural deodorants.

Texture: Quite dry and ~glides~ well, again, similar to the likes of dove stick deodorants

Scent repelling power: tried this for a week, sadly it was an uneventful week, so didn’t get a good workout, but held up while I was at my desk or power walking to get lunch.

Sweat repelling power: I haven’t yet met a natural deodorant which stops you from sweating (I think that goes against the point?), and as I said, it wasn’t a particularly active week, but seemed to do the trick ok

Side note: Claims to be Hypo-allergenic but my girlfriend used it and said it irritated her underarms, so if you’re super sensitive, it’s maybe a no-go.

Rating: 6/10, not terrible, not blown away! Pretty nice for chill days.

The Scent: This one is a bit more ~natural~ but pleasant, notes of Jasmine, bergamot, and sandalwood. The scent makes it feel like you are really taking the natural plunge, but in a luxe way.

Texture: Formulated with Coconut and Avocado oils, this one is a little more emollient and buttery, goes on smoothly.

Scent repelling power: TBH, not so impressed, which sucks because the packaging is chic AF and I really wanted it to last as long as it claims to. I do believe everyone’s deodorant journey is different, so you may have a different experience, but I found that after a few hours of running errands, I just smelt like my sweat and the deodorant scent combined :/

Sweat repelling power: No dice. But as I mentioned, not a realistic expectation of the natural deodorants, so all g.

Rating: 4/10, sadly, this wasn’t a winner for me, but the redeeming factors such as scent and application and packaging, mean I will still use if I’m having a bare minimum day.

The Claim: Made from 100% natural mineral salts which eliminate odor by leaving an invisible protective barrier against odor-causing bacteria. Body odour is apparently caused by bacteria that forms on the body, and natural mineral salts form a barrier on the skin that provides an unfriendly environment for odor-causing bacteria, even under the sweatiest of conditions.

The Scent: This deodorant comes in a few different scent ways, but I stuck to the original, unscented, as I do find that scented deodorants can be irritating or a bit gross.

Texture: Literally feels like you are rolling slightly thicker water on your pits, quite refreshing.

Scent repelling power: Ok, straight off the bat, this deodorant is NOT f*king around. Literally lasts for hours, I never smell when I use this, it’s my OG go-to natural deodorant because it ACTUALLY works due to the science behind it. I want to be their hype man because it is cheap and effective (basically me in deodorant form).

Sweat repelling power: Again, in my natural deodorant world, this does not exist, but hit me up if you find one that does.

Rating: 9/10, this stuff is the sh*t. If you are planning on embarking on a natural deodorant journey, start here, because it’s cheap, and you won’t hate yourself for spending money if it somehow doesn’t work for you.