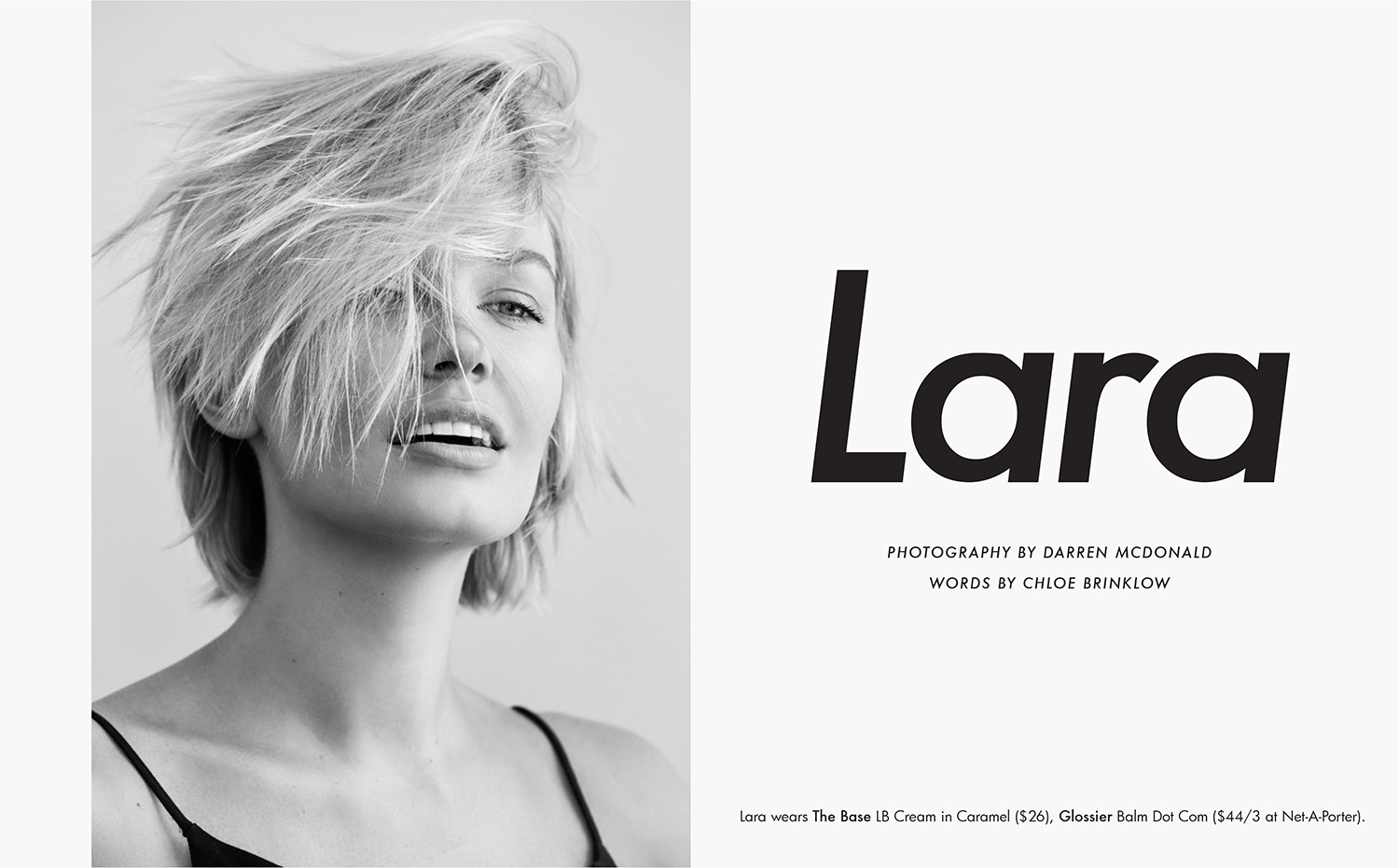 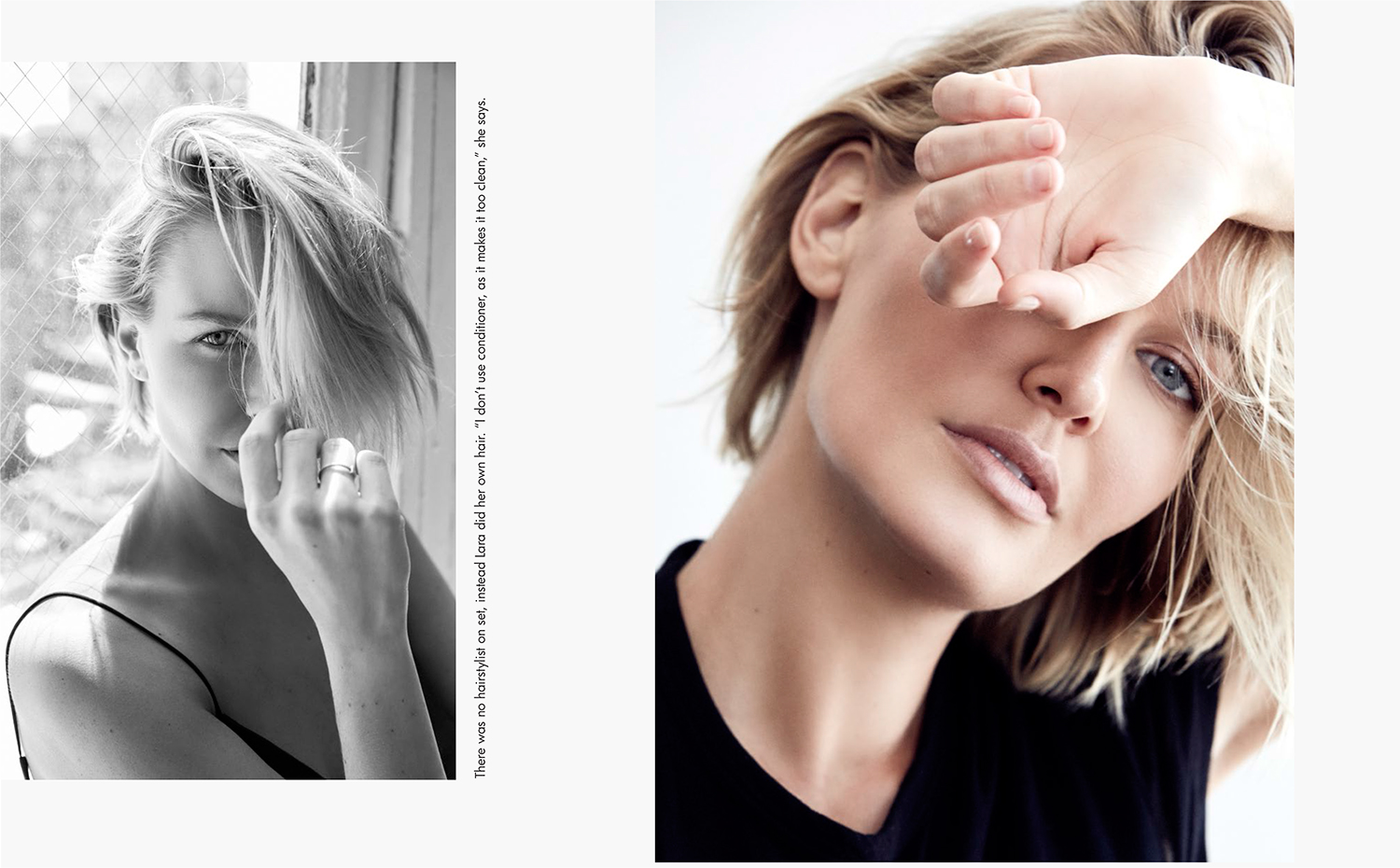 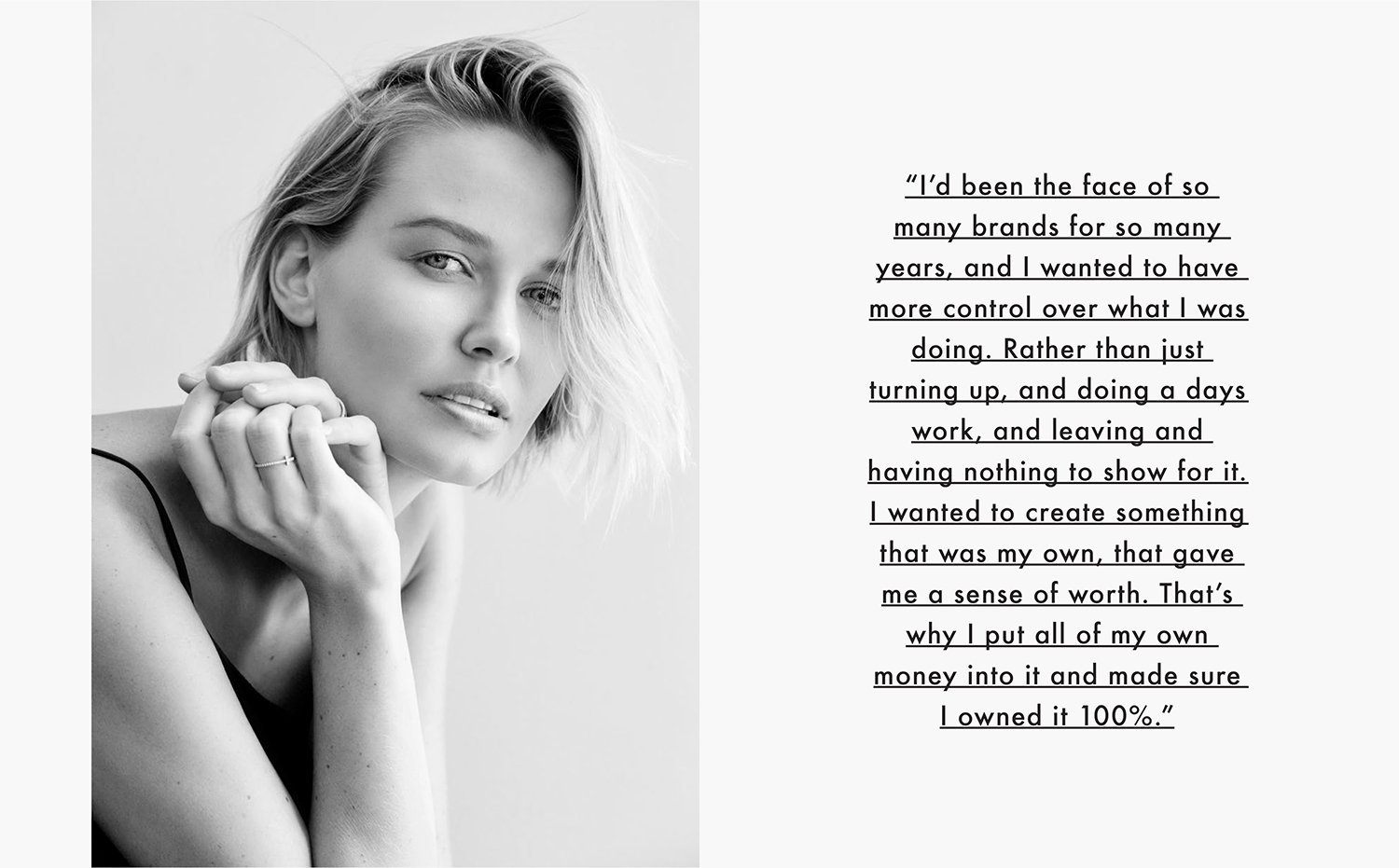 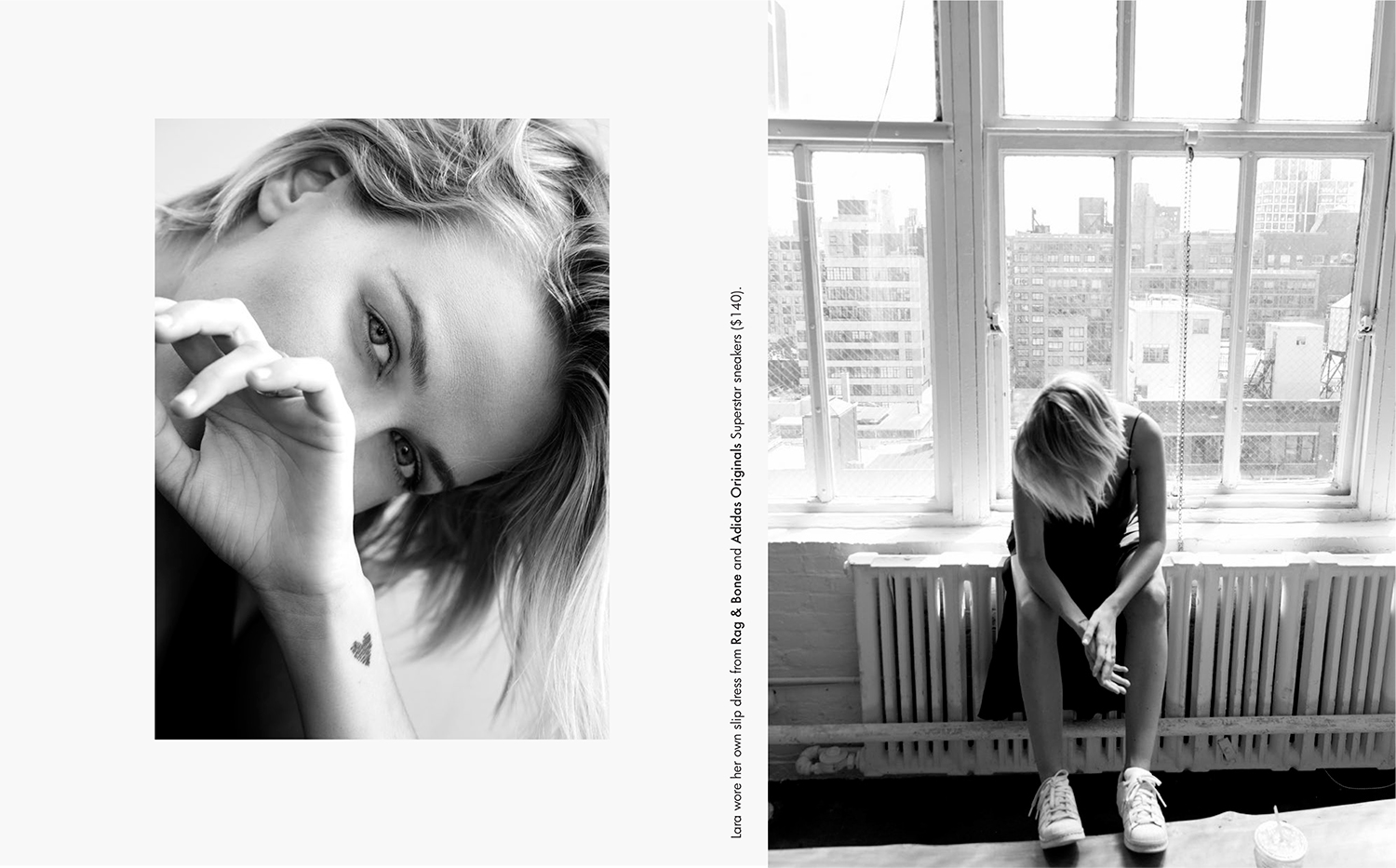 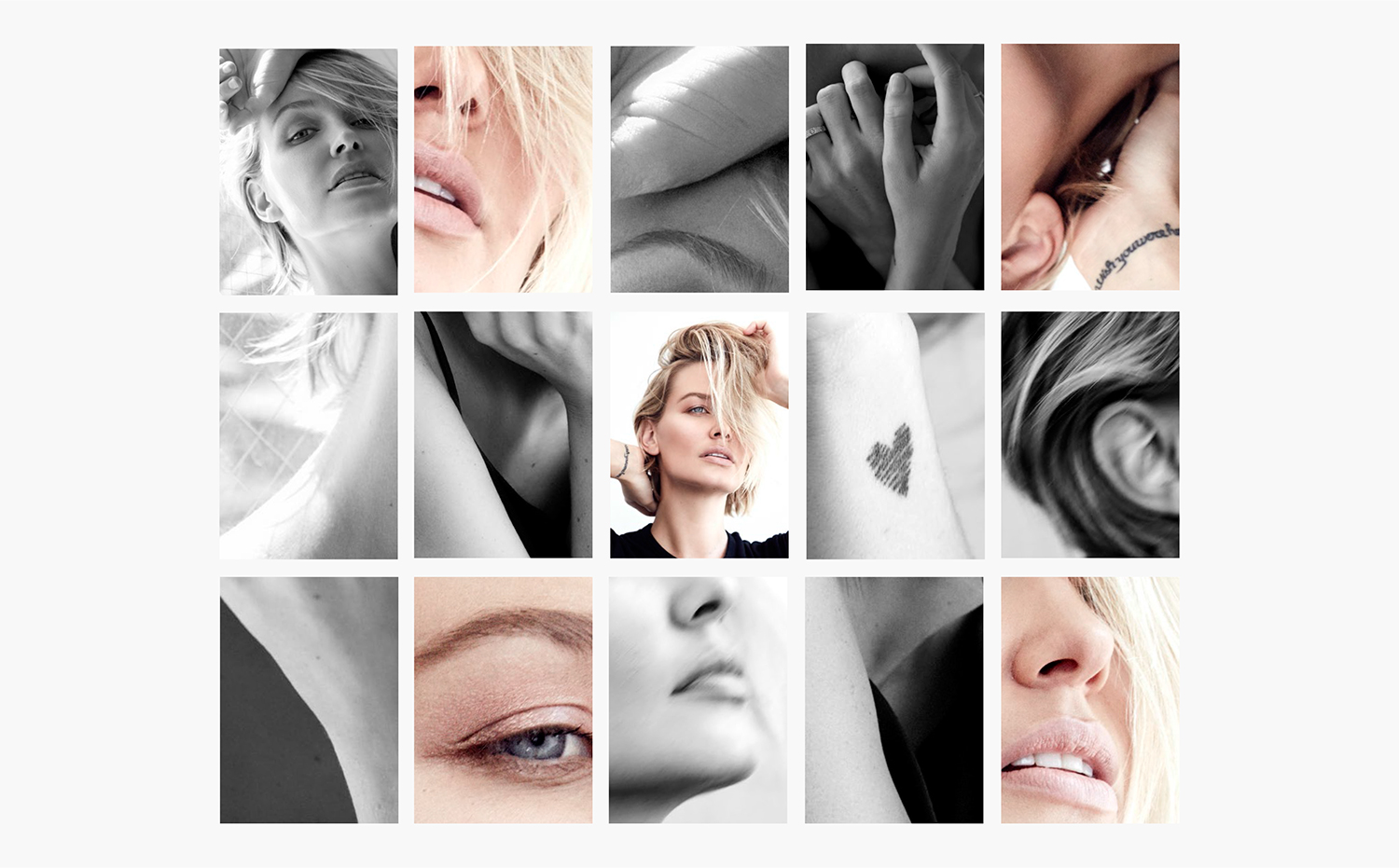 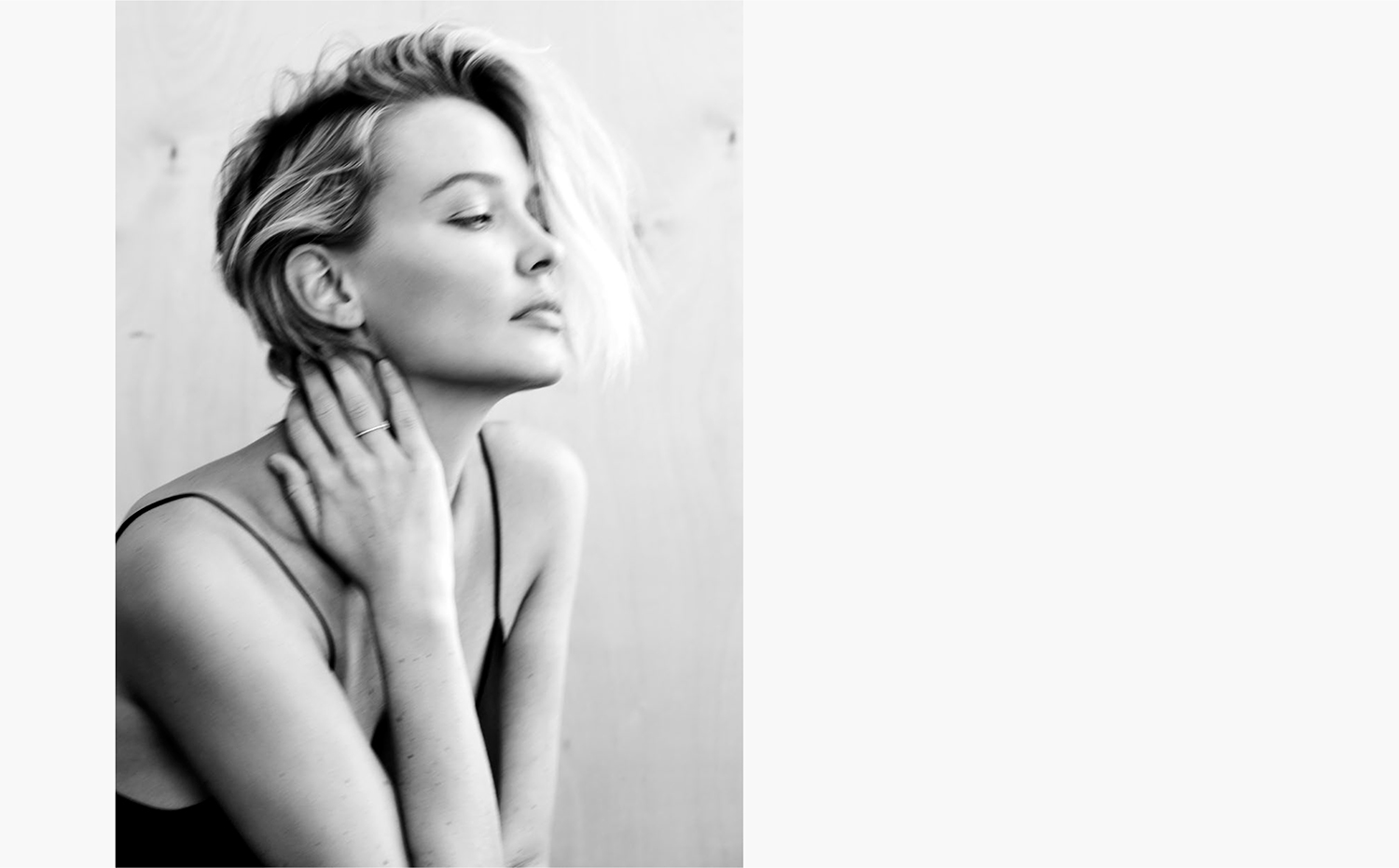 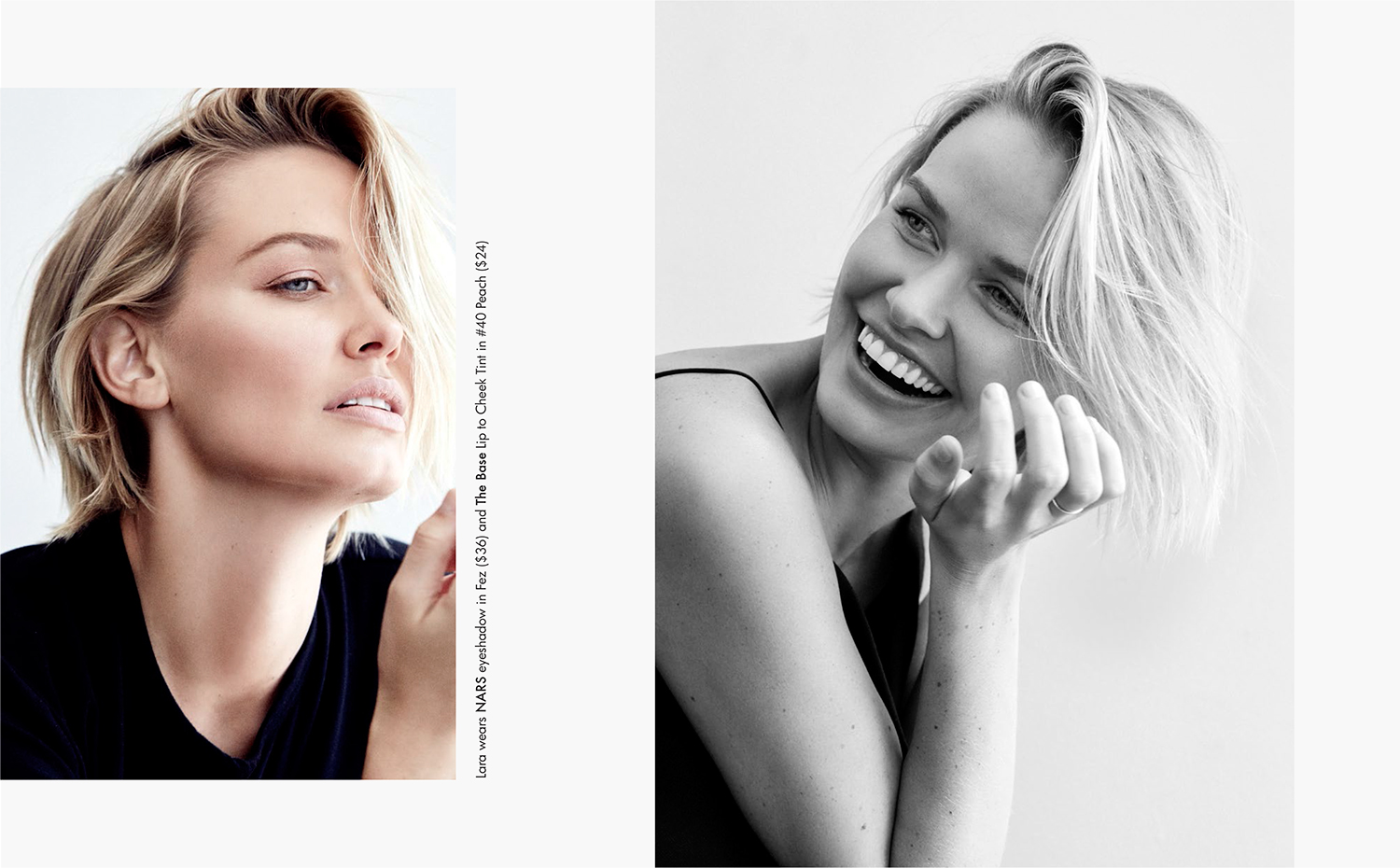 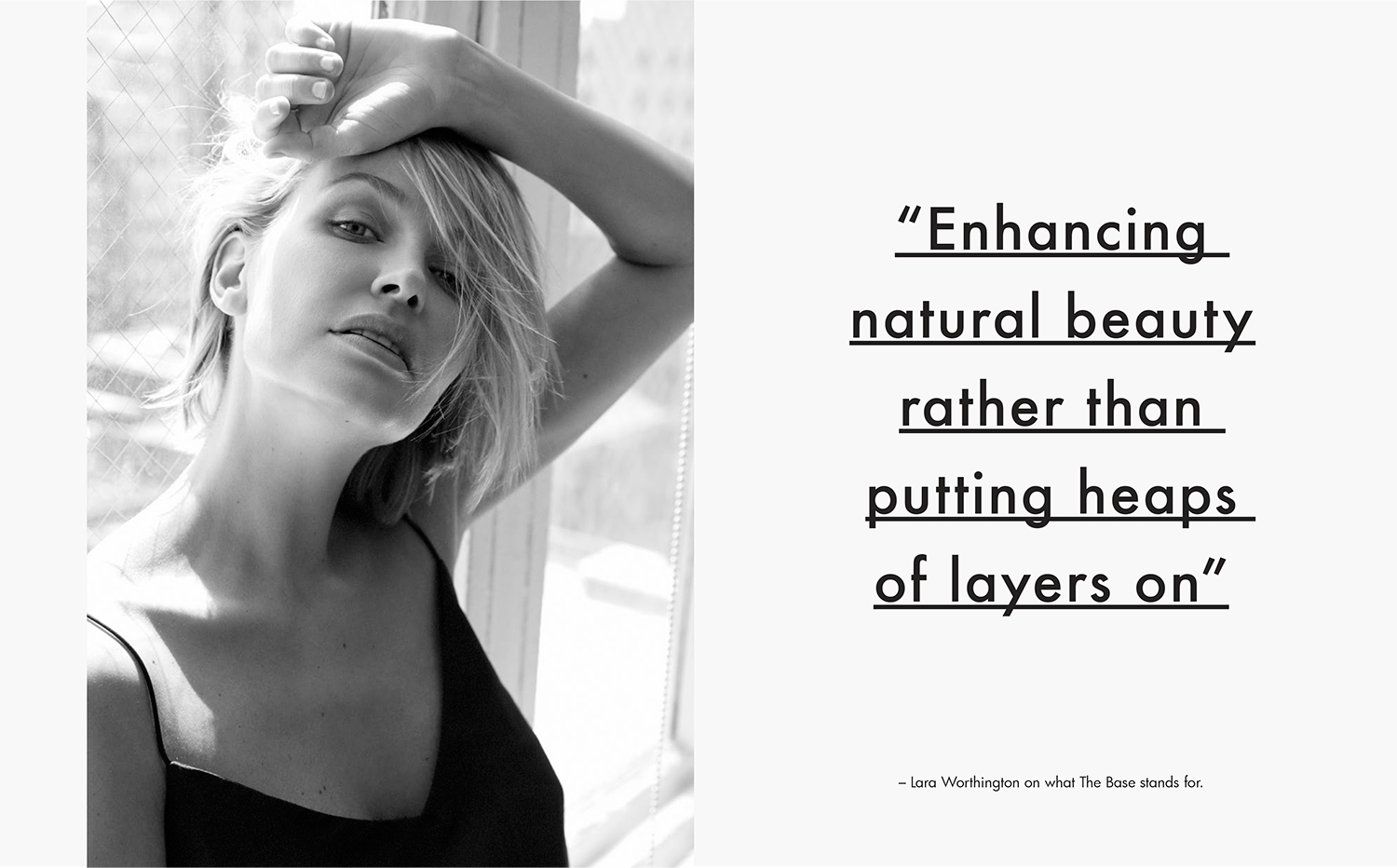 The doorbell to the North Loft penthouse at the Soho Grand rings, and I open it to reveal Lara Worthington looking effortless in a long, black silk slip, over a white tee, and Louis Vuitton combat boots. Her outfit shouldn’t work, but it does. She’s here for a fitting, makeup free, noticeably six-months pregnant (with her second child with husband, Sam Worthington), and glowing – not the humidity-induced, sweaty sheen everyone else is sporting in New York, but that glow. The glow you buy all the BB creams, lustre drops and skincare to get, but can never achieve.

But you’ve heard all this before, and read this clichéd intro before. And you probably think you know everything there is to know about Lara Worthington.

We spend the next few days emailing back-and-forth with ideas for this TOMBOY Beauty shoot. I learn that she is creative, collaborative and aware. She challenges me on concepts, the creative team, and locations. It’s both impressive and refreshing to work with someone who cares so much about the end product.

But I suspect her requests stem from more than just concern for how she looks. Days before at her fitting, she unapologetically rejected more options than she accepted, and on set a few days later had suggestions when it came to framing, makeup and styling. After years of trusting other people with her image she’s learnt that no one will protect it quite like she can. That, and she no longer identifies as a model hired to execute someone else’s vision, “I would say I am a Mum, a CEO and a businesswoman. Model is down [the list] now, I don’t do much modelling anymore. I feel like I’ve grown up and changed the direction,” she says.

Fast-forward to August, and after a few failed attempts at Skype we settle on a Facetime call. Worthington is sitting in the living room of the New York apartment she shares with Worthington and their son Rocket, her hair damp from the shower. She apologises for the lack of contact and explains the family has just returned from a spontaneous vacation. Life for this 29-year-old revolves around Sam, Rocket, pregnancy, and her cosmetics venture, The Base by Lara Bingle, launched in 2014… But it hasn’t always been this way.

In 2015 Worthington told Harper’s BAZAAR Australia, “…Everyone has a past, mine was just publicised.” An anecdote fit for the likes of Angelina Jolie or Amber Valetta, but since that controversial tourism Australia ad aired more than a decade ago, Worthington has been in the headlines for one trivial thing or another. Yet, unsurprisingly, no one has reported that at age 27 Worthington sold her Sydney apartment and poured the profits into creating her own beauty brand, which, only two years later, is successful, expanding, has amassed a global cult-following, and is stocked in Sephora.

Conceived after years spent working with leading makeup artists, The Base by Lara Bingle stems from her desire for something more, and its ethos echoes her own approach to beauty: “Enhancing natural beauty rather than putting heaps of layers on.” It’s a message I agree with and would like to send to my (hypothetical) daughters. “I’d been the face of so many brands for so many years, and I wanted to have more control over what I was doing. Rather than just turning up, and doing a days work, and leaving and having nothing to show for it,” Worthington says. “I wanted to create something that was my own, that gave me a sense of worth. That’s why I put all of my own money into it and made sure I owned it 100%.”

Worthington has plans to slowly grow the brand’s offering, and while she can’t reveal exactly what that looks like, she assures me the less-is-more tenet will be applied. “I wouldn’t go and make a blue and purple eyeshadow, it’s just ‘The Base’ of what women need,” she says.

During our conversations Worthington rarely comes across as scripted or overly media-conscious. Instead she seems almost naïve (though I know she’s not) – a sharp contrast to her obvious business prowess and sense of purpose. It’s like she’s in a transitional period, which I can relate to… For example, when she answers my questions, she will occasionally start with “I don’t know…” before delivering a measured, thoughtful and intelligent response.

Me: Is there someone you admire in business?

Worthington: I don’t know… the visionary women, self-made women with inspirational careers. Like, Natalie Massenet when she was at Net-A-Porter, Jenna Lyons of J.Crew – she’s cool. Jessica Alba. Even Emily [Current} and Merret [Elliott] from Current Elliott. I am always impressed and have a lot of respect for women who have work/life balance. And knowing how to prioritise and what to prioritise, and what’s important. I am still working on that.

Me: What part of the business do you enjoy the most?

Worthington: I don’t know… I think initially it was the creative – the logo, the design, the website, the packaging, the EDMs – I still do all of those.  The social media inspires me and keeps me going creatively. But what gets me excited is the customers, seeing how they like the product, and how much they love what I’ve created, or if I can change certain things. That’s why I started The Base online, because it’s good to see a direct customer response.

At other times, Worthington’s concentration lapses and she comes out with deadpan one-liners that make me laugh out loud. “Can you see my pigmentation? It’s so bad,” delivered while staring at the tiny facetime square on her iPhone.

When the subject changes to social media, Worthington, who predominantly uses instagram for work, attributes the shift in her approach to her husband. “Sam is from a different generation to me,” she laughs. “He didn’t grow up with it like we did. It’s not in our house, so it became less-and-less of a want for me, and [less of] a need to see other people’s lives, rather than just live my own.” She references actress Alicia Vikander (“She doesn’t have Instagram”) and Mary Kate and Ashley Olsen (“They just do their work”), as the sort of people that intrigue and inspire her. “There’s no mystery anymore and I think that’s what people miss,” she says.

While her business successes are often the add-on to stories on motherhood and marrying the movie star, I also think Sam receives too much credit for Lara’s evolution. Isn’t she just growing up!? That being said, there is an obvious sense of calm when Lara talks about Sam and her family, which is perhaps what people zone-in on. As her Cartier ring is visible some of the shots, I ask her about it. “It’s my wedding band,” she says holding it up. “We haven’t really gotten around to getting an engagement ring.”

After speaking for almost two hours, my last questions are about the future and her responses further cement the duality of her current stage. She’s most scared of? “Childbirth – knowing you have to give birth and there is no other way you can go is scary. There’s no going back, you have to go forward. Now I know more than last time. And for someone who doesn’t have kids, you can’t explain it,” she says. On what she’s most looking forward to: “I want to continue to grow the company based on good values, and eventually, when the timing is right next year, expand the range to international markets. But now though, it’s just about establishing a good platform in Australia”.